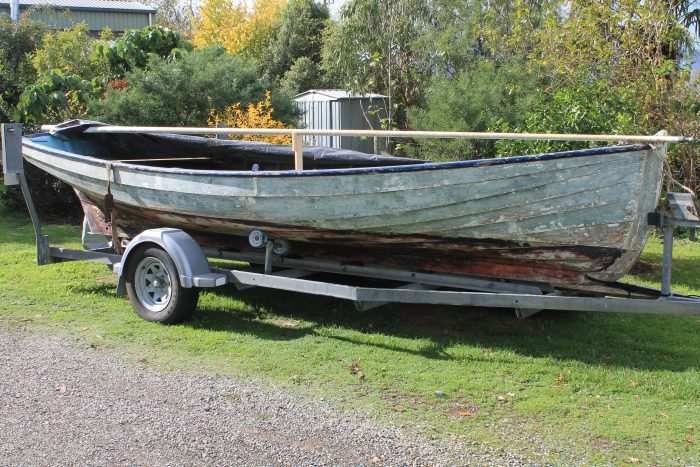 This 19ft sailing gig was built in 1900 on Ulva Island in Paterson Inlet Stuart Island.Ulva is getting a full restoration all ribs need replacing beltings and clamp were broken in several place’s at some stage she had a inboard and they cut the stern post out below the waterline to house the prop. When she was put back to as she is now they just bolted a block in instead of replacing the stern post. New stern post is needed. all the planking looks ok at this stage stem and keel are sound some iron bolts need replacing and i have found some iron nails most are just heads shaft has gone rusted away. Ulva was Built by Walter Traill he was the Postmaster storekeeper and Stuart Island ranger. sold 1920 to Cedric Smith Retired Surveyor & civil engineer who renamed her Marigold. 1927 sold to WA Stout Lawyer of Invercargill. 1940-41 sold to Ernest W Squires who lifted her one plank and quarter decked the boat making her difficult to row squires seldom if ever sailed the boat which had reverted to her original name. 1945 sold to George Dodds who installed a air cooled engine in her. 1976 sold to Mervyn King and re-rigged dipping lug in 1977 she was used during the filming of castaways’ The story of the General Grant survivors 1978 she came ashore in Halfmoon bay and sustained severe damage. she was repaird eventually and a endless mooring was put in at Golden Bay. 1980 they took over renting Rout’s Boatshed at Watercress the King family still own her